I have been invited to participate in a public debate next week. The foundation sponsoring it has started something called the Podius Debates. There will be three of them across the country this year, bringing public speakers to various locations to have serious debates about issues of national interest in a civil forum. This corporation supports high school and college debate, and I am glad they have extended their support to letting us debate has-beens have a chance to show what we can do. 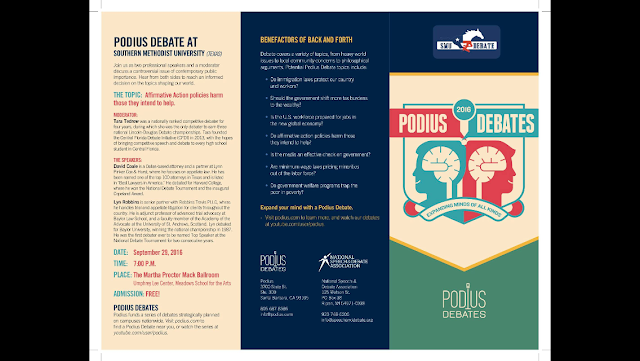 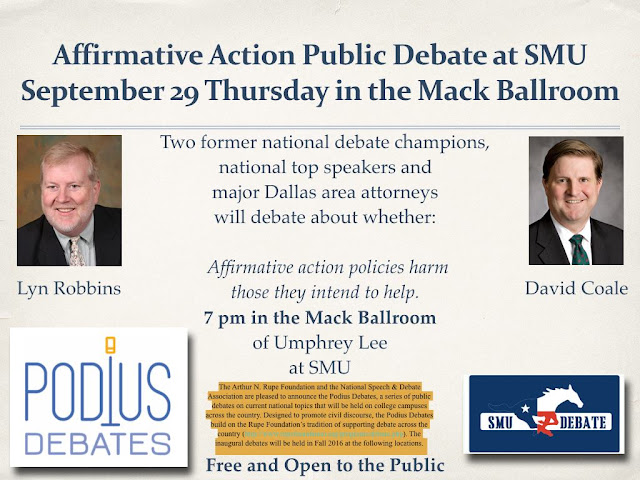 We have been assigned the topic and the side. It was not my choice to enter the public arena and argue that affirmative action harms those it intends to help, but I will fulfill this assignment and happily join the process. As I have written here, here, and elsewhere, debate has taught me that there are at least two sides to everything, and to take a side and debate thoughtfully someone who is carefully taking the other side brings out the best of us.

I will admit, however, to some bit of concern about tackling this issue in today's climate. News of Charlotte and Tulsa dominates this week's TV. We are not far removed from Dallas and Flint and Trayvon Martin. We can disagree all we want on why it is happening - 24-hour news cycles or actual rise in racism or liberal news slants or conservative news slants or whatever - but only those with their heads way in the sand do not recognize the staggering rise in the rhetoric concerning race relations in America in 2016. Whatever you think about "Black Lives Matter" or Colin Kaepernick or the new incarnation of "Ghostbusters," the issues of black-vs-white or black-and-white have dominated discussions coast to coast. That is likely a good thing, but the reason I say I have a "bit of concern" is the nature of much of that discussion. I have, half-jokingly, told the others involved in the debate that I need to be shielded from the tomatoes that may be thrown from the audience because of the side of the debate I have been assigned. The debate has already been attacked on social media as lacking the necessary "human narrative" to have a legitimate discussion of this topic because neither of the debaters is black, as though qualification to discuss an issue of national importance is based on skin color. Irony abounds.

Notwithstanding what audience reaction might be, I am eager to participate, to demonstrate what reasoned public discourse on a subject of significant import can look like. To fail to do so would make me a hypocrite, as I have written too often - here and here, just as examples - of the need to participate well in the public sphere.

I was talking to a friend last night about the debate, and my tongue slipped as I said that I was doing this to add to the "public discord." I meant "public discourse," of course. It was a quick object lesson in how easy it is for a discussion of reason and civility to move to vitriol and anger, from discourse to discord.

I think the debate will be fun. If you are in the DFW area on September 29, what better way to celebrate my wife's birthday then to come to a public debate?

I think we may allow some folks to think about affirmative action in ways they have not before. I also think that if we can provide, in some small way, an example of how to discuss crucial, emotional issues without throwing tomatoes or turning over cars, we will have done a much greater service.
at September 23, 2016 1 comment:

We are in the desert. A desert is a dry place. Nothing much grows. It is hot - not pleasant but maddeningly, drainingly hot. Scorching. When...